When treating a pathology, the choice of medicine and its galenic form¹ is governed by the patient’s state of health and the desired administration method. Use of the injectable form, for a long time feared and denigrated, has increased significantly since the end of the 19th century. Today it is one of the star performers among pharmaceutical forms. A success which is also driven by developments in containers. A look back over more than 150 years of innovation and development.

The idea of administering a medicine parenterally to the human body is not recent. It first appeared back in the 17th century, shortly after the discovery of the circulatory system. But the unconvincing results of the first injections (infections, gas embolisms, toxicity of products) curbed their development. So much so, that at the beginning of the 19th century, Dr Barbier, a doctor at the Hôtel-Dieu in Amiens declared “we will just mention this procedure briefly. It has too many disadvantages, and is even dangerous, to ever become common”. However, intravenous injection reappeared several years later. It was only carried out as a last resort, when the patient was in a critical state.

It wasn’t until Pasteur came along that the cause of many cases of infections was understood. These were due to the presence of microorganisms in injectable medicines and the lack of asepsis during injection. In 1895, the French pharmacopoeia published a method of sterilization which became compulsory for injectable forms. Thanks to this step and the introduction of good administration practices, the so long decried injectable medicines finally achieved recognition. At the beginning of the First World War, the first edition of the Dictionnaire des Spécialités Pharmaceutiques² listed 40 injectable products. 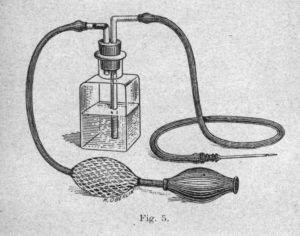 At the beginning of the 20th century, the use of infusion solutes took off, particularly in the treatment of infectious diseases and haemorrhages. In 1926, the French pharmacopoeia listed glucose solutions, then, ten years later, bicarbonate solutions. Their use in major wars around the world brought numerous improvements and preparations became increasingly complex. The first injectable lipid emulsions appeared in the 1960s and were recognized as essential for parenteral nutrition. Hospitals acquired specialized units for compounded formulations..

At the same time, a new technique came into being: freeze drying³ A spin-off from the food industry, it created real enthusiasm in the pharmaceutical industry. This process, which preserves product structure, is used for serums, some vaccines and blood-derived products such as human plasma. In the last decades of the 20th century, the range of products able to benefit from freeze drying extended to molecules which are unstable in solution and which require reconstitution before being administered to the patient.

Today, injectable medicines are almost exclusively made by the pharmaceutical industry. Scientific research carried out in laboratories is developing ever more innovative and effective products. The new galenic forms are mainly administered intravenously, with solutes acting as the therapeutic carrier. This is the case for example with nanomedicines.

From the goose feather to the needle, from reusable to single use containers 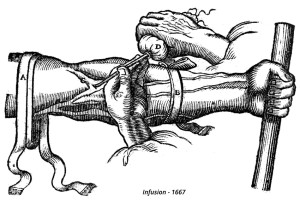 The boom in injectable solutions is inseparable from the development of means of administration and containers. The arrival of new raw materials has shaken up administration practices and storage methods for intravenous products. In the 17th century, you had to reveal the vein and incise it before injecting with… a goose feather! As for injectable medicines, they were packaged in a reusable container extended by a pipe. Shortly before 1850, Charles Pravaz revolutionized the administration of injectables by inventing a hollow silver needle. The innovative glass body of the syringe allowed Pravaz to control the quantity of medicine injected. Gradually, single use syringes replaced the traditional reusable glass syringes. 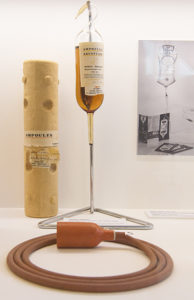 At the end of the 19th century, the first single dose phials, which could contain up to 1000ml of solution, appeared. It was no longer necessary to decant the liquid, they were ready to use! The top part of the phial in the form of a hook was suspended while the lower tip, when broken, was connected to the patient by a tube fitted with a needle. So, the infusion operated through gravity. Graduated glass bottles (reusable) with a dropper chamber replaced them until the arrival of plastic materials. From the 1970s onwards, synthetic polymers were used in the manufacture of new containers: flexible bags. Hard wearing and lightweight, they are available in a wide range of volumes. First manufactured in PVC, then in PP, EVA or FEP, flexible bags, because of their intrinsic nature, are compatible with the majority of injectable medicines. And the advantages are considerable: a closed system, transparency, inert materials, multiple compartments, tolerance of negative temperatures, UV barrier, etc. They are also used for unstable products such as ternary mixtures for parenteral nutrition, some antibiotics and anti-cancer medications, in preparation at the time of use.

So, it was at the end of a long almost two hundred-year journey that injectable products reached the level of quality that we know today. Their development, closely linked to that of means of administration and containers, has made the drip simple and safe. For despite their late maturity, injectable medicines now play a dominant role in modern medicine. Something which the German Dr Michael Ettmüller predicted back in 1668: “there’s no quicker source of relief than the drip for sudden-onset, acute disorders”.

¹ The galenic form of medicine is the physical form in which it will be administered.
² The Dictionnaire des Spécialités Pharmaceutiques was published by Louis Vidal and Henri George in 1914. Soon, only Vidal’s name remained. In 1976 it became the work of reference for medicine monographs.
³ Lyophilisation or freeze-drying consists in gradually removing water from a previously frozen product by lowering the pressure in its container. The water changes from a solid state to steam without going through the liquid stage.