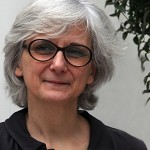 On 10 October 2013, contemporary art took Paris by storm with the twelfth Nuit Blanche (‘sleepless night’) event dedicated to art and culture. In the nave of Saint-Merry Church, IV bags, spiderwort cuttings, water, light and songs combined to create ‘Anamorphose’, a living sculpture by Pascale Peyret. Pascale is originally from Lyon and lives and works in Paris. We met her in her workshop in the 10th arrondissement. 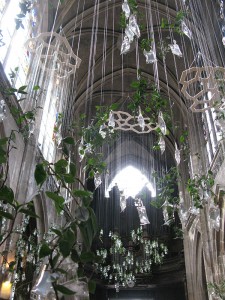 Sylvie Ponlot: For those who have not seen the exhibition, can you tell us about Anamorphose?

Pascale Peyret: The work was made up of wooden frames with plants, forming vegetal cells hanging from the arches of the church. We needed 17 km of nylon thread to hang 1100 IV bags filled with water. They were lit up by LEDs and had spiderwort cuttings hanging from them. The bags were arranged in ascending spirals between 50 cm and 2.50 m high, resembling a DNA chain. There was real harmony between the installation and the church, the cells and the ceiling rose, the plants and the frieze.

SP: Twenty-six thousand people came to admire Anamorphose. What did they think of it?

PP: At night-time the installation was transformed into a starlit vault. The moment when visitors took in the extent of the work was a magical one. People touched the bags. One visitor, a professional singer, sang twice. One man wanted to dance, and a member of the team had the idea of sticking LEDs to his T-shirt. The result was magnificent. Word of mouth did the rest! The installation was the one that attracted the most visitors during the night.

SP: What made you choose the spiderwort?

PP: In France it is popularly known as Misère (‘poverty’), but in Spain spiderwort is considered as a plant that brings good luck. They call it Amor de hombre, human love. The symbolism is spot-on, because during the 10-day assembly period we worked with seven homeless people accommodated by the Aux captifs, la libération association. They worked really hard on Anamorphose. We wanted to involve them in the work in order to help restore their self-esteem through art. Art is a kind a gateway, a healing process. If you don’t commit to what you do, to the shape you want to give to the world and life, then you’re missing out on something. You have nothing left to say. This work expresses a genuine social bond, the bond of my commitment.

SP: Quite a success for a temporary installation, wouldn’t you say?

PP: It actually stayed there until 17 October, International Day for the Eradication of Poverty. We then took it down. Each visitor was invited to take away their sprig of amor de hombre and take care of it. Fireflies swarmed across the city, arousing the curiosity of passers-by. Anamorphose metamorphosed! I received a lot of testimonials emphasising the humanist dimension of the work. The discourse on the refusal of poverty, the transmission of the installation’s elements – the seven volunteers handed out each firefly – and the banquet we shared all helped fix Anamorphose in time and space. I still receive ‘news’ of the cuttings that have taken root.

Scan the QR code to access the video online 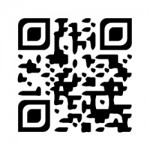 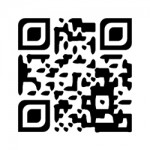