The Right to Try 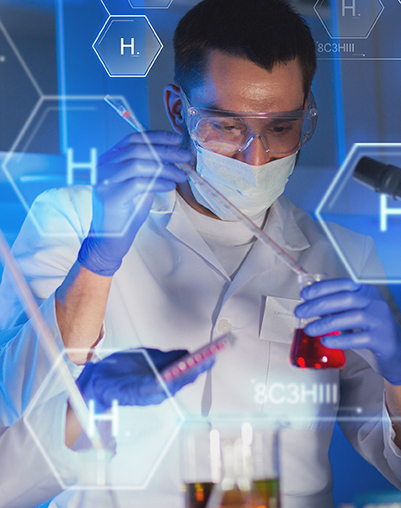 A number of treatments currently in development could improve or even save lives. However, it may be ten years before the product is approved and out on the market because of product development times and trials. This is a bit too long a delay for terminal patients! In the United States, as in Europe, there are several alternatives that involve giving patients access to experimental treatments. Review the possibilities available.

The first means of accessing experimental medication is to take part in clinical trials.1 These studies are authorized and controlled by medication regulation authorities such as the FDA (Food and Drug Administration) or EMA (European Medicines Agency). The aim is to evaluate the safety and efficiency of the product, the organism’s tolerance to the treatment, and then compare the product to a commonly used medicine, if one exists. However, choosing to take part in a clinical trial does not guarantee access to the product in development. Most patients will be given a placebo,2 with only a restricted number receiving the validated treatment. This, however, is the only way of ensuring an objective study of new treatments.

Expanded Access (Compassionate Use) programs are another option. Set up by the FDA 20 years ago and since the year 2000 in Europe, they enable patients who have not had access to clinical trials to apply for experimental treatments from health agencies. Authorization is only granted under certain conditions, for example, proving that there is not already a comparable and satisfactory treatment, and that the pharmaceutical laboratory has submitted a clinical protocol compliant with regulations. Since 2010, more than 90% of access requests for Compassionate Use programs have been authorized in the United States.

A new American alternative, the ‘Right to Try’ law

In May 2014, Colorado became the first state to ratify the ‘Right to Try’ draft bill. Widely adopted by many states,3 the law circumvents the FDA authorities and eliminates the need for paperwork. It provides the right for patients suffering from incurable diseases to directly request access to developing treatments from laboratories. The laboratories must have successfully passed Phase I clinical trials. 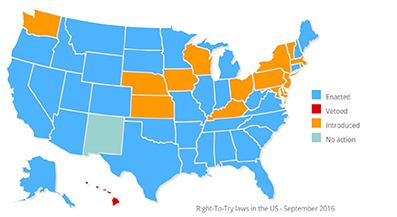 Despite its popularity among citizens and legislators, the law has given rise to much criticism in the medical world. Critics protest that the treatments have only completed one of three phases of clinic trials and that they do not have safety data about the severely ill patients. Others deem it to be against moral ethics due to the high level of responsibility resting upon the laboratory and the doctor, or due to its inequality.4 It is also thought that patients may be less inclined to take part in clinical trials which are indispensable for companies to be able to make an NDA (New Drug Application). From a federal perspective, the law is deemed unconstitutional by its opponents. However, it was brought before the American Senate last spring. There is no doubt that its review will cause much debates.

1 – Flexmag 6, Injectable medicine, the obstacle course
2 – A dose that lacks an active substance and is used for its psychological effect. Placebo effect.
3 – In September 2016, 32 American states had adopted this law and 17 had presented it for deliberation. Only New Mexico did not put it to the vote. After issuing a veto in 2015, the Governor of California, Jerry Brown, had just enacted the law.
4 – Related to prohibitive costs not reimbursed by private health insurance. In some states, the patients risk losing their palliative care or home-based care.